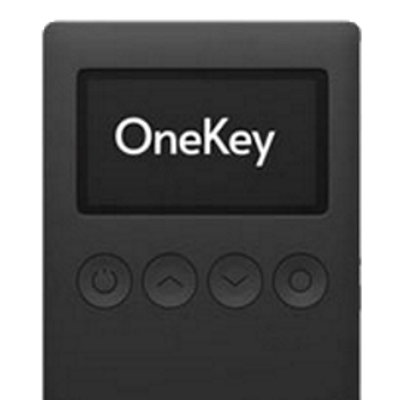 Please help us spread the word discussing transparency with OneKey - Limited Edition  via their Twitter!

Update 2022-12-28: The provider sent us a link to claims of this product being open source and reproducible. We have to check this.

OneKey is an open source hardware wallet by Bixin. The primary language for the website is Chinese. OneKey, the company claims to be based in Singapore

Number 5. The private keys of OneKey are all created offline, avoid cyber attacks completely. The physical buttons and display screen can provide complete protection even if the computer or mobile phone is implanted with malicious viruses, the transaction information needs double check on hardware device then signed for release. Software side cannot tamper it， private key is more secure throughout.

Private keys are not shared with OneKeyHQ - ✔️

Wallet helpers and seeds created with OneKey are stored locally and encrypted, so only you can decrypt the information, and our servers do not and cannot store any of the user’s private data. No more centralized institutions, you are in full control of your encrypted assets.

Tutorial on how to withdraw coins to OneKey

From the renderings provided on this page, the OneKey hardware wallet has a confirmation button.

However, this is from the official documentation. We were not able to find third-party content such as pictures or videos on social media or blogs that depicts the actual device.

Activating the wallet starts with the device providing the mnemonics and then securing it with a pin.

The wallet activation tutorial can be found here.

The wallet can then be connected to the OneKey Desktop client or through a browser plug-in.

OneKey claims that their software code and firmware codes are open source:

Sadly their repository redirects to “OneKeyHQ/wallet-deprecated” which contains no source code and no mention of “firmware”.

There is another repo called OneKeyHQ/firmware (11396 commits) which is a fork of trezor-firmware (10805 commits).

Trezor One Reproducible works but with a Bluetooth firmware option. The screenshots and lack of discussion of such a feature imply there is no way of seeing a hash of the about to be installed firmware. Neither could we find the signed binary releases.

We opened an issue in the otherwise empty issue tracker of the most likely candidate for being the source code repository of this product but until confirmation of tis, we have to file this product as closed source as their website doesn’t link to any actual firmware source code. As such the product is not verifiable.