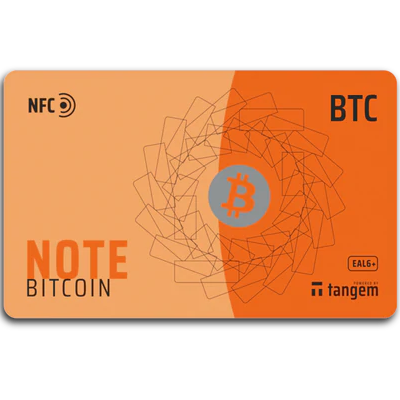 Please help us spread the word discussing build reproducibility with Tangem Note  via their Twitter!

A Tangem Card is a highly secure hardware cold wallet made to store any kind of digital assets / cryptocurrency / Bitcoin on blockchain technology. With an NFC-enabled phone, you can verify your balance and extract your assets if you want to move them to another wallet.

Transactions and verifications are carried out via the Android companion app,

Tangem - Crypto wallet No Source! . The app must be installed through a phone that supports NFC.

A video tutorial on how to setup the Tangem could be found on YouTube.

With the Tangem card, a user can:

The private key is stored on the secure EAL6+ chip. Tangem also claims that their firmware is audited by Kudelski Security

There are several mechanisms of attestation for the holder to ensure they operate a genuine Tangem card:

A wallet on the card is an Asymmetric Cryptography key pair (public and private key).

Wallet private key is the main secret of the card. It will be generated by the card on the factory or by the user using the Create wallet method. It is never revealed and accessible by the host application via the NFC interface. COS will internally use a wallet private key only during execution of Sign and some attestation commands.

Tangem Card is equipped with a True Random Number Generator that’s used for generating private keys. This approach makes it impossible to generate the same key, as well as the ability to predict the result of the operation.

Like most cryptocurrency cards that use NFC, the Tangem depends on the companion app,

They claim that transactions are truly hand-to-hand as the Tangem is meant to be physically passed on from one person to another. Depending on the companion app, the receiver must have an NFC enabled Android phone with the Tangem app installed.

We sent out a tweet to clarify with Tangem whether the private key gets generated in the factory or by the user.

No, in our B2C products all wallets has to be generated by users. But we have this option for B2B partners and can generate wallets at the factory if needed. But again, not for the Tangem Wallets and Tangem Notes.

As a bearer token, the Tangem lacks an input or output interface that could confirm a transaction independent from a companion app when redeeming the funds.