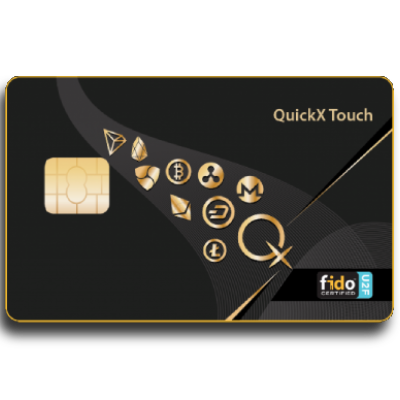 Please help us spread the word discussing build reproducibility with QuickX Touch  via their Twitter!

QuickX Touch is an NFC Card-typed cold wallet. It is a hardware wallet that can safely store various cryptocurrency. QuickX Touch keeps your assets secure. QuickX Touch is a rugged, durable credit card. QuickX Touch fully complies with ISO7816 and ISO14443 specifications. In addition, QuickX TOuch does not require a battery and therefore can be used semi-permanently. QuickX Touch can support multiple cryptocurrencies such as Bitcoin, Ethereum, Bitcoin Cash, Litecoin, Omisego, various ERC-20 tokens and many other coins.

The card is primarily an NFC device which can connect with an Android phone with NFC capabilities. It has a companion app:

QuickX Touch (New) Few Users Defunct! , both of which are no longer available as of February 20, 2022.

A third-party video tutorial on YouTube details how to create a wallet with QuickXTouch:

There are 2 other projects that are related to the QuickX Touch: The QuickX Protocol and CNexchange.io. Although the Android app is no longer available, the hardware wallet can still be ordered through its online portal.

Like most NFC cards that are reliant on a companion app on another device, the QuickX touch risks exposure of the private key through the connected device. There was also no mention whether the private keys are stored on a secure chip element. With no input and output interfaces, this makes the card highly dependent on the app. This risk is also made more prominent when the app is suddenly not available for download anymore.