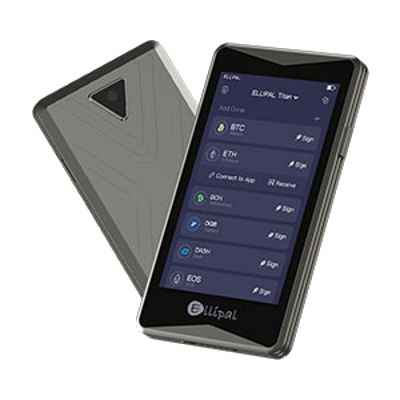 Please help us spread the word discussing transparency with ELLIPAL TITAN  via their Twitter!

Ellipal claims to go beyond being a hardware wallet. It describes itself as an “Air-gapped cold storage hardware wallet” with no possibility of connecting to the Internet at all. It is also described as having anti-tampering and anti-disassembly features. The makers claim that the “chip will delete every data when it detects a breach”.

Private keys can be created offline

Since the device is air-gapped, the private keys are generated offline.

Private keys are not shared

The means for Ellipal to connect to the Internet and make a transaction occur through a companion app that could be installed on Android or iOS. The hardware wallet communicates with this companion app via a QR code. Ellipal claims that that the QR code does not transmit or share the private keys. Ellipal has published the specifications for their use of the QR code on Github (PDF file).

The Ellipal hardware wallet is very dependent on the downloadable companion app because the user needs to have the two devices on hand in order to send a transaction. A tutorial on how to send transactions is described here.

The device has the basic appearance of a smart phone, with a camera and a touchscreen.

This is a video demonstration of how the Ellipal Titan functions.

Open-source is indeed useful for users and experts to perform audits and do reviews. However, open-source doesn’t lead to safer solutions naturally.

Occasionally, open-source can be cracked easily by hackers because the resources, codes, and utilities are readily available. There are many vulnerabilities on open source products such as the Trezor, the most famous open-source hardware wallet. *Ref 1. Unfixable Seed Extraction on Trezor - A practical and reliable attack. **Ref 2. Crack Trezor in 15minutes.

They are open about being closed source and thus not verifiable.