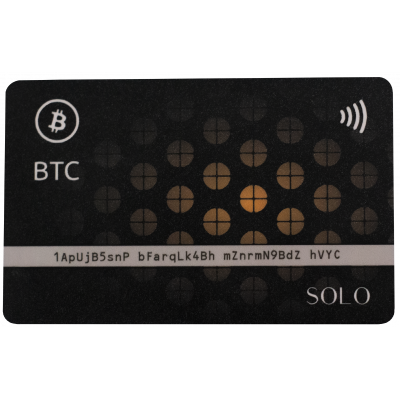 The device gets delivered with private keys as defined by the provider!

Are the keys never shared with the provider?

If the answer is "no", we mark it as "Provided private keys".

The best hardware wallet cannot guarantee that the provider deleted the keys if the private keys were put onto the device by them in the first place.

There is no way of knowing if the provider took a copy in the process. If they did, all funds controlled by those devices are potentially also under the control of the provider and could be moved out of the client’s control at any time at the provider’s discretion.

Please help us spread the word discussing build reproducibility with CoinPlus Solo  via their Twitter!

Here is a video showing how to redeem the private key on CoinPlus Solo.

CoinPlus also has a mobile app that combines the two secrets to compute the private key.

The two secrets are two printed strings printed on the same card by two different entities. These are initially covered and ideally, can only be known by the user when he is in possession of the card. The two are then entered into a program which then converts the two into a private key.

CoinPlus involves two different companies to engrave two secrets on the product ensuring that only the buyer will have access to the private key.

CoinPlus website has a page explaining how the wallet is supposed to keep your private key secure.

Each company generates a secret using a secure random number generator and derives an asymmetric key pair (public and private) from which it stores only the public key. Then each company engraves its secret on the bar and covers it with a holographic security labels ensuring its safety.

CoinPlus published the source code for the re-computation of the private key on github under the MIT license. The flaws of process-based solution is easier to identify and to migitage compare to an electronic solution.

Currently, the process works with two companies that create 2 different secrets. But to make it even stronger, other actors could very well get involved in the creation process. We deliver trust because our solution is based on mathematics and not on proprietary technology, which means that everyone can verify the algorithms.

The SOLO Card Pro is a more sophisticated solution in that it employs multiple cards thereby creating a 2 out of 3, multi-sig solution.

From its description on eBay:

The CoinPlus SOLO PRO Card BTC is a set of 3 laser engraved plastic cards for short and medium term use.

These affordable and secure cards are designed for professionals and individuals, resistant to water and hackers. The SOLO PRO card comes in the form of 3 credit cards.

The 6 different secrets are engraved on the back of the 3 cards and hidden by 2 security labels for each card marked “secret 1” or “secret 2”.

The cards contain an NFC chip and a QR Code that allow two things, the storage of the SOLO’s public address, and the redirection to any url that is encoded at the beginning of the cards. Secrets are not present in the NFC chip or QR Code.

These functions do not allow you to make withdrawals or payments from the SOLO, but allow you to share the SOLO public address quickly and easily.https://www.coinplus.com/en/17-solo-bar

On how to “calculate the private key:”

The Solo Bar is quite similar to the CoinPlus Solo with the exception that the keys are on a bar. Its description:

SOLO Bars made of non-precious metal are bars imported from China with the only elements present being the boundaries of the areas in which secrets 1 and 2 will be engraved, the public address and the serial number of the bar. Once received, the bars are checked and stored.

The manufacturing process is described:

Once the product has been manufactured and delivered to Coinplus. The registration process for cryptographic codes remains to be followed. This process is described in the ‘patent’ section.

The patent was registered in Luxembourg, however it was taken off the page of CoinPlus.

The “Partners” page on the CoinPlus website names two companies, Simplex and SELP.

The GitHub description states that it is:

Python code to retrieve the private key from your Coinplus Solo

As quoted above, the provider states that since “CoinPlus involves two different companies to engrave two secrets on the product that ensures only the buyer will have access to the private key.” However