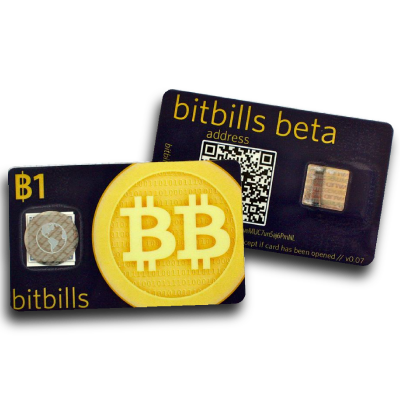 The device gets delivered with private keys as defined by the provider!

Are the keys never shared with the provider?

If the answer is "no", we mark it as "Provided private keys".

The best hardware wallet cannot guarantee that the provider deleted the keys if the private keys were put onto the device by them in the first place.

There is no way of knowing if the provider took a copy in the process. If they did, all funds controlled by those devices are potentially also under the control of the provider and could be moved out of the client’s control at any time at the provider’s discretion.

The patent’s title is “Creating and using digital currency”. The abstract reads:

The patent filing generated some discussions about the ethics of patenting what was supposed to be related to Open Source technology.

In response, another provider, cryptocoinwalletcards filed a 301 Citation of Prior Artwork against Bitbills in 2013.

When it was first announced on Bitcointalk on May 9, 2011, the poster described it as the first physical incarnation of Bitcoins. It was announced even earlier than the

Casascius Coins Plain Keys Defunct! which was announced on December of the same year.

How it worked via Bitcointalk

A Bitbill is a plastic card that holds the cryptographic key that will allow the face value amount of the card to be spent. The key is on a QR code embedded within the card such that it cannot be read without the card showing evidence of tampering. Additionally, the card has a hologram affixed to ensure that the card is not a counterfeit.

The intention is that the card will be left unopened and then can be treated as money by being acceptable at face value when making a transaction in-person at a retailer, for example. At any time, the card can be opened and the funds spent through the Bitcoin payment network. Once the card has been opened it will no longer be acceptable as payment anywhere else due to the fact that its private key has already been revealed.

Archived FAQ via the Wayback Machine

Do you keep a copy of the cards’ private keys?

After each card has been produced and proven functional, we delete all records of the private key. This means that once the card leaves our hands, we can no longer access the associated bitcoins (be aware, this means we also can’t help if you lose or destroy your card).

Cards cost their face value plus a small fee. Shipping is ฿0.25 to anywhere in the US, and ฿0.60 to most international locations. We offer a 25% fee discount for any order of 10 or more Bitbills cards.

Like the Casascius coins, and amidst the controversy of the patent filing, Bitbills’ vulnerability hangs on the fact that the provider will have to print the private key on the card itself. The wording on the descriptions provided in the Bitcointalk thread details how the cards are no longer acceptable once the the card has been opened. This seemingly takes for granted the fact that somebody had to print the QR code in the first place. Bitbills ceased production in May 15, 2012.