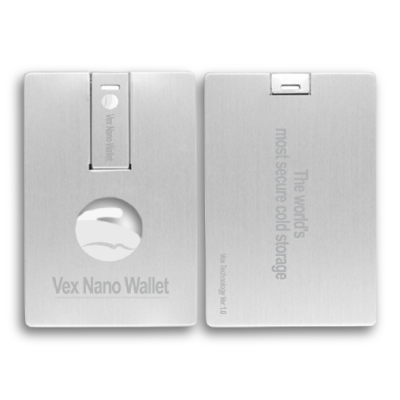 Please help us spread the word discussing build reproducibility with Vex Block Nano  via their Twitter!

⚠️ Warning: This project has been described as a scam online. It has an associated token (VBO).

This wallet has the form factor of a USB EMV card. It has a similar appearance with

It has a related Android app that is still available via Google Play, although we don’t know if it is a companion app to the hardware wallet.

One of the reviews for the mobile app is this:

Johnny Begood
★☆☆☆☆ October 8, 2019
Scam App. Avoid at all costs. Transactions are not recorded on the Blockchain! Huge red flag. Plus you don’t get the private keys. Remember not your keys = not your crypto. Fair better and safer apps out there. Use this at your peril!

Vex Capital and Technologies’ websites vexblock.co and vexnano.tech are no longer online. The last tweet made on its Twitter account was in October 4, 2019. Its claimed features included:

We believe that this project was discontinued. The absence of any further activity leads us to believe that this device along with the project is no longer available. If it were, it does not possess any form of display that would allow users to confirm transactions.