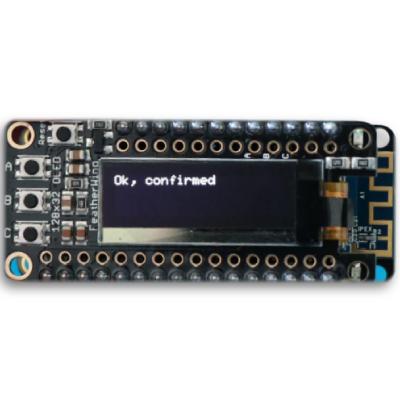 The Blockchain Hackathon 2018 was an event held in Lisbon, Portugal. Participants formed teams to build a product related to blockchain. The first prize was 10,000 EUR. The team that won created this device.

From the GitHub repository:

This is a early prototype demonstrating how a LN hardware wallet might be constructed. We hope to continue developing the project into a toolkit to make it easier for anyone to build their own hardware wallet. We would not recommend anyone try to build a wallet or run the UI based on the current code, especially for real funds. Watch this space for updates.

The winning team was comprised of:

Slide Presentation of the Device

The conceptual layers were:

The prototype we pitched and demoed used a Linux / MacOS laptop with bitcoind and our patched lightningd running, as well as a Python web backend to communicate with lightningd, and to serve requests from the React frontend code.

We have a fork of c-lightning at hkjn/lightning, where we added patches to allow the private key material to stay on the hardware wallet and not be exposed to the client device (Linux laptop). At least that was the ideal, which turned out not to be fully feasible within the roughly two days for the Hackathon..

Since the hackathon, the project has not received any additional updates. This renders the device defunct. We do not believe this specific project became commercially available. However, the instructions for building the device are there which makes it a do-it-yourself project.

This project is not meant for non-technical end users.

Is the product meant to be ready for use "out of the box"?

If the answer is "no", we mark it as "Do-It-Yourself Project".

Many hardware wallet projects aim to be as transparent as possible by using only off-the-shelf hardware with an open design and open code. If the product reviewed is not available in an assembled form - if the user has to source his own hardware to then maybe solder and compile software to install on the device it falls into this category.